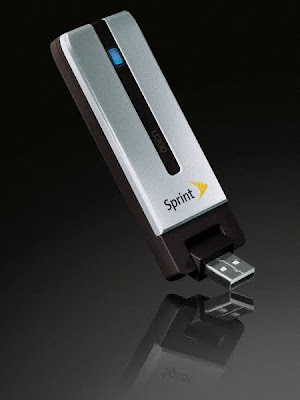 The IMT-2000 wideband standard is driven by skyrocketing demand for wireless Internet applications. According to Cahners In-Stat Group research, in the United States alone more than 85 million people subscribe to wireless services, and consumers in 46 million U.S. households have Internet access. It was only a matter of time before people would want to have access to the Internet from their wireless handsets. Cahners In-Stat Group projects that more that nearly 25 million people in the U.S. will use mobile wireless Internet services by 2003. In Japan, demand for the much publicized i-Mode service is primarily driven by the fact that the vast majority of Japanese people do not have wireline Internet access. Within less than six months, more than 5 million Japanese people subscribed to this service, and phenomenal future growth is inevitable.

Internet users are becoming wireless users, and expect applications to converge and fit smaller, untethered form factors. Cahners In- Stat Group expects that consumers, whether mobile or at their home PCs, will exhibit insatiable appetites for Web downloads and messaging; streaming media, color graphics, gaming, Java-enabled location-based applets, Internet browsing, and access to corporate intranets through secure firewalls. (Moreover, there are bandwidth-intensive applications, as yet unknown, that will unfold within the next few years.)
No comments:
Email ThisBlogThis!Share to TwitterShare to FacebookShare to Pinterest
Labels: Wifi Vs 3G 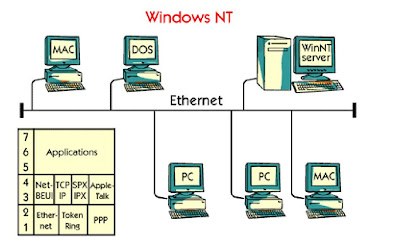 In the summer of 1993 Microsoft released their new Network Operating System, NT for workstations. The NT server followed in the autumn of 1994. The network protocols used in NT are NetBEUI, TCP/IP, IPX and AppleTalk, which gives NT the opportunity to communicate with different types of network platforms. Windows NT is a multisession operating system. NT can run on different types of processors like Intel, Alpha and PowerPC. NT has also a good support for remote dial-in communication, called RAS (Remote Access Service).

NT is normally used on top of Ethernet, but it is also possible to use in Token Ring.
No comments:
Email ThisBlogThis!Share to TwitterShare to FacebookShare to Pinterest
Labels: Computer Networks 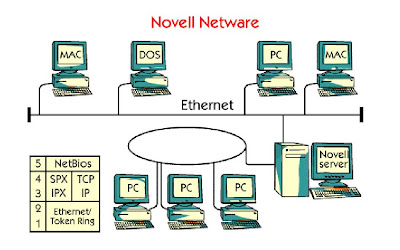 Novell Netware has for a long time been a market leader of NOS. Netware has been on the market since 1983 and it runs only on Intel processors.

Novell developed NetWare, which is a powerful multisession system. This means that NetWare can handle different parallel sessions as previously only found in larger types of computers.

NetWare is sold in many versions corresponding to the number of users, types of connections and level of security.

The client could be a personal computer with or without its own hard disc and with an operating system such as MS-DOS, OS/2, MacOS or UNIX.

Netware handles both IPX and TCP/IP traffic over Ethernet or Token Ring.
No comments:
Email ThisBlogThis!Share to TwitterShare to FacebookShare to Pinterest
Labels: Computer Networks 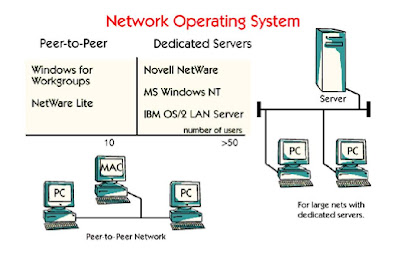 After the physical network the NOS, Network Operating System, is the most important part in a PC network. The network operating system is responsible for the levels 3 to 7 in the OSI model. This means that NOS is independent of the type of network. It works in the same manner on an Ethernet as a Token Ring.

There are two types of NOS. The first type is called "peer to peer” which means that no dedicated server is needed. The other type is server based and is used for larger, more demanding networks.

There are many vendors with their own types of NOS on the market.

The leading systems for "peer to peer” based NOS are NetWare Lite and Windows for Workgroups. 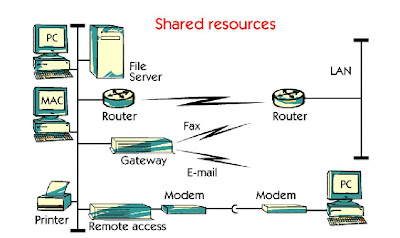 One of the main reasons for using local networks is to share common resources, such as printers, files, e-mail and devices for communication.

In the picture you see a shared printer and a file server which is used to share files. Routers and gateways are used for communication to other LANs and remote devices such as computers and faxes.
No comments:
Email ThisBlogThis!Share to TwitterShare to FacebookShare to Pinterest
Labels: Computer Networks 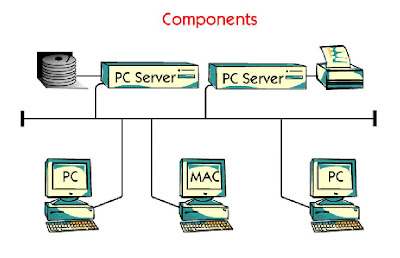 A PC network is used to share resources such as files and printers. A PC network is normally based on Ethernet or Token Ring and consists of a number of components:

No comments:
Email ThisBlogThis!Share to TwitterShare to FacebookShare to Pinterest
Labels: Computer Networks

Adware is advertising-supported software that displays pop-up advertisements
whenever the program is running. The software is usually available via free download from the Internet, and it is the advertisements that create revenue for the company. Although seemingly harmless (aside from intrusiveness and annoyance of pop-up ads), adware can install components onto your computer that track personal information (including your age, gender, location, buying preferences, surfing habits, etc.). Most advertising supported software doesn't inform you that it installs adware on your system, other than through a buried reference in a license agreement. In many cases the software will not function without the adware component. Some Adware will install itself on your computer even if you decline the offer.
No comments:
Email ThisBlogThis!Share to TwitterShare to FacebookShare to Pinterest
Labels: Computer Viruses

Dialers are a type of software typically used by vendors serving pornography via the Internet. Once dialer software is installed, the user is disconnected from their usual Internet service provider and then redirected by the dialer program to call into another phone number where the user is billed per minute. Dialers do not "spy" on their intended victims, but these malevolent programs can rack up significant long distance phone charges, costing victims time and money.
No comments:
Email ThisBlogThis!Share to TwitterShare to FacebookShare to Pinterest
Labels: Computer Viruses

System monitors are applications designed to monitor computer activity to
various degrees. These programs can capture virtually everything you do on your computer including recording all keystrokes, emails, chat room dialogue, web sites visited, and programs run. System monitors usually run in the background so that you do not know that you are being monitored. The information gathered by the system monitor is stored on your computer in an encrypted log file for later retrieval. Some programs are capable of emailing the log files to another location/person. System monitors can be installed by someone that shares your computer, or come disguised as email attachments or "freeware" software products.
No comments:
Email ThisBlogThis!Share to TwitterShare to FacebookShare to Pinterest
Labels: Computer Viruses

As mentioned previously, Trojans are malicious programs that appear as harmless or desirable applications. Trojans are often designed to cause loss or theft of computer data. Some Trojans called RATs (Remote Administration Tools) allow an attacker to gain unrestricted access of your computer whenever you are online. The attacker can perform activities such as file transfers, adding/deleting files or programs, and controlling your mouse and keyboard. Trojans are generally distributed as a desirable program or file, in email attachments or bundled with another software program.
No comments:
Email ThisBlogThis!Share to TwitterShare to FacebookShare to Pinterest
Labels: Computer Viruses

One of the key distinctions between 3G and WiFi that we have only touched upon lightly thus far is that 3G and other mobile technologies use licensed spectrum, while WiFi uses unlicensed shared spectrum. This has important implications for (1) Cost of service; (2) Quality of Service (QoS) and Congestion Management; and (3) Industry structure.

First, the upfront cost of acquiring a spectrum license represents a substantial share of the capital costs of deploying 3G services. This cost is not faced by WiFi which uses the shared 2.4Ghz unlicensed, shared spectrum. The cost of a spectrum license represents a substantial entry barrier that makes it less likely that 3G services (or other services requiring licensed spectrum) could emerge in a decentralized fashion. Of course, with increased flexibility in spectrum licensing rules and with the emergence ofsecondary markets that are being facilitated by these rules, it is possible that the upfront costs of obtaining a spectrum license could be shared to allow decentralized infrastructure deployment to proceed. Under the traditional licensing approach, the licensing of the spectrum, the construction of the network infrastructure, and the management/operation of the service were all undertaken by a single firm. Moreover, rigid licensing rules(motivated in part by interference concerns, but also in part, by interest group politic) limited the ability of spectrum license holders to flexibly innovate with respect to the technologies used, the services offered, or their mode of operation. In the face of rapid technical progress, changing supply and demand dynamics, this lack of flexibility increased the costs and reduced the efficiency of spectrum utilization. High value spectrum trapped in low value uses could not be readily redeployed. With the emergence of secondary markets, it would be possible for spectrum brokers to emerge or service integrators that could help distribute the spectrum cost to enable decentralized infrastructure investment for licensed spectrum.


Second, while licensed spectrum is expensive, it does have the advantage of facilitating QoS management. With licensed spectrum, the licensee is protected from interference from other service providers. This means that the licensee can enforce centralized allocation of scarce frequencies to adopt the congestion management strategy that is most appropriate. In contrast, the unlicensed spectrum used by WiFi imposes strict power limits on users (i.e., responsibility not to interfere with other users) and forces users to accept interference from others. This makes it easier for a 3G provider to market a service with a predictable level of service and to support delay-sensitive services such as real-time telephony. In contrast, while a WiFi network can address the problem of congestion associated with users on the WiFi network, it cannot control potential interference from other WiFi service providers or other RF sources that are sharing the unlicensed spectrum (both of which will appear as elevated background noise). This represents a serious challenge to supporting delay-sensitive services and to scaling service in the face of increasing competition from multiple and overlapping multiple service providers. A number of researchers have started thinking about how to facilitate more efficient resource allocation of unlicensed spectrum, including research on possible protocols that would enable QoS to be managed more effectively. Third, the different spectrum regimes have direct implications for industry structure. For example, the FreeNet movement is not easily conceivable in the 3G world of licensed spectrum. Alternatively, it seems that the current licensing regime favors incumbency and, because it raises entry barriers, may make wireless- facilities-based competition less feasible.
No comments:
Email ThisBlogThis!Share to TwitterShare to FacebookShare to Pinterest
Labels: Wifi Vs 3G

Cookies are pieces of information that are generated by a web server and stored on your computer for future access. Cookies were originally implemented to allow you to customize your web experience, and continue to serve a useful purpose in enabling a personalized web experience. However, some web sites now issue “adware” cookies, which allow multiple web sites to store and access cookies that may contain personal information (including surfing habits, user names and passwords, areas of interest, etc.), and then simultaneously share the information they contain with other web sites. This sharing of information allows marketing firms to create a user profile based on your personal information, which they then sell it other firms. Adware cookies are almost always installed and accessed without your knowledge or consent.
No comments:
Email ThisBlogThis!Share to TwitterShare to FacebookShare to Pinterest
Labels: Computer Viruses
Newer Posts Older Posts Home
Subscribe to: Posts (Atom)