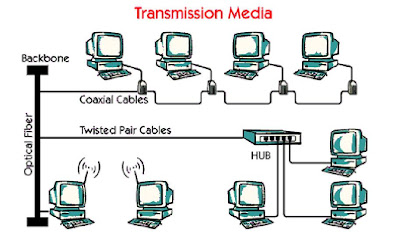 IEEE standards for LANs describe different types of transmission media. It could be cable,
fiber or wireless.


Optical fiber:
Optical fibers can be used to carry data signals in the form of modulated light beams with
high bandwidth. An optical fiber consists of an extremely thin cylinder of glass, called the
core, surrounded by a concentric layer of glass. In the picture, the optical fiber would
typically be used for the backbone network.

Wireless:
Different types of radio LANs are available on the market. This is an expensive type of
LAN technique. In the picture, wireless connection is used between the two hosts with
antennas. Wireless LAN connections are often used in old historical buildings where you are
not allowed to install cables.
Email ThisBlogThis!Share to TwitterShare to FacebookShare to Pinterest
Labels: Computer Networks

Hi thank you for comment in Assignment Lanka " Book Mark on me' To future references.